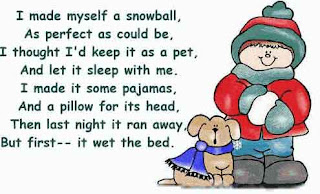 One winter morning a couple was listening to the radio over breakfast. They hear the announcer say, "We are going to have 8 to 10 inches of snow today. You must park your car on the even-numbered side of the street, so the snowplows can get through." Norman's wife goes out and moves her car.

A week later while they are eating breakfast again, the radio announcer says, "We are expecting 10 to 12 inches of snow today. You must park your car on the odd-numbered side of the street, so the snowplows can get through." Norman's wife goes out and moves her car again.

The next week they are again having breakfast, when the radio announcer says, "We are expecting 12 to 14 inches of snow today You must park ..." Then the power goes out.

Norman's wife is very upset, and with a worried look on her face she says, Honey, I don't know what to do. Which side of the street do I need to park on so the snowplows can get through?"

With the love and understanding in his voice that all men who are married to blondes exhibit, Norman says .. "Why don't you just leave it in the garage this time?"
Posted by Mike Smith at Thursday, January 25, 2007 No comments:

Old Prospector and the Young Gunslinger.

The Old Prospector and the Young Gunslinger. An old prospector walked his tired old mule into a western town one day. He'd been out in the desert for months without a drop of whiskey. He walked up to the saloon and tied his old mule to the hitch rail. As he stood there brushing some of the dust from his clothes, a young gunslinger walked out of the saloon. He had a revolver in one hand and a bottle of whiskey in the other, and he looked at the old prospector and laughed. Then he said, "Now tell me, old man, have you ever danced?"
The old prospector looked up at him and said "No, I never did dance, I just never did want to." A small group had gathered by then and the gunslinger said, "Well, you old fool, you're gonna dance now." And he started shooting at the old man's feet. The old prospector was hopping around and everyone was laughing.
The gunslinger fired his last bullet, then holstered his gun and turned around to go back into the saloon. The old prospector reached up on his mule, pulled out his shotgun, and cocked the hammers, making a clicking sound the gunslinger knew well. Every thing got real quiet. The gunslinger turned around and was looking at both barrels aimed at his chest. The old prospector asked him, "Now tell me, sonny, did you ever kiss the asshole of a mule?"
The gunslinger swallowed hard, then said "No, but I've always wanted to."

Generate Your Own Error message

This is a fun site if you want to be creative.

Make your own Error Message. 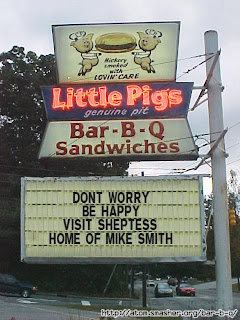 Sheptess.
Posted by Mike Smith at Thursday, January 11, 2007 No comments:

RECIPE FOR THE PERFECT MARRIAGE

1. Two times a week, we go to a nice restaurant, have a
little beverage, good food and companionship.
She goes on Tuesdays, I go on Fridays.

2. We also sleep in separate beds.
Hers is in California and mine is in Texas.

3. I take my wife everywhere.....
but she keeps finding her way back.

4. I asked my wife where she wanted to go for our
anniversary. "Somewhere I haven't been in a long time!"
she said.
So I suggested the kitchen.

6. She has an electric blender, electric toaster and electric
bread maker.
She said "There are too many gadgets and no place
to sit down!" .. So I bought her an electric chair.

7. My wife told me the car wasn't running well because
there was water in the carburetor.
I asked where the car was; she told me "In the lake."

8. She got a mud pack and looked great for two days.
Then the mud fell off.

10. Remember: Marriage is the number one cause of divorce.

11. I married Miss Right. I just didn't know her
first name was Always. 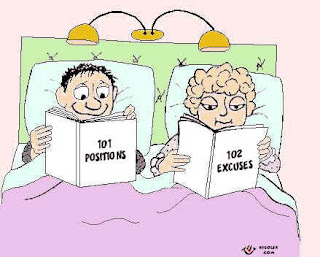