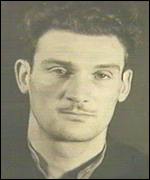 Eddie Chapman was a British double agent during World War II. He was born in County Durham in the north of England.


After deserting from the Coldstream Guards in the 1930s to become a safecracker and spent a number of stretches in jail for the crime.

On being arrested in Scotland and charged with blowing the safe of the headquarters of the Edinburgh Co-operative Society ,he was let out on bail. He escaped to the Channel Island of Jersey , but ended up cracking a safe in a dance hall and was eventually imprisoned for fifteen years.

When the German's occupied The Channel Islands he was recruited as an agent, but on landing in England he offered his services to MI5 , and was to known as Zig Zag.

This is where his unsual story really began.


Read a little more about Eddie Chapman and other agents on The BBC Web Site.
Posted by Mike Smith at Saturday, October 21, 2006